Recipes for pierogies, borscht, aloo gobi, pozole, mücver and many other delicious dishes find their way into this new cookbook written by refugees and immigrants, some of whom live in New York.

Non-profit Education Felt published the cookbook A world of yum, which is available now for $30. The book not only makes a great gift, but also helps students learn English through Felt’s free programming.

RECOMMENDED: This new book festival will raise funds for LGBTQ+ people at risk

As a British immigrant, Caroline McKinnon has always felt welcome in America. But in the turmoil of Donald Trump’s election in 2016, she realized how scared Muslim immigrants were. She attended protests and marches but felt she was not wealthy enough to make much of a difference. That is until she decided to found Felt in 2017 to provide free English lessons to immigrants and refugees. 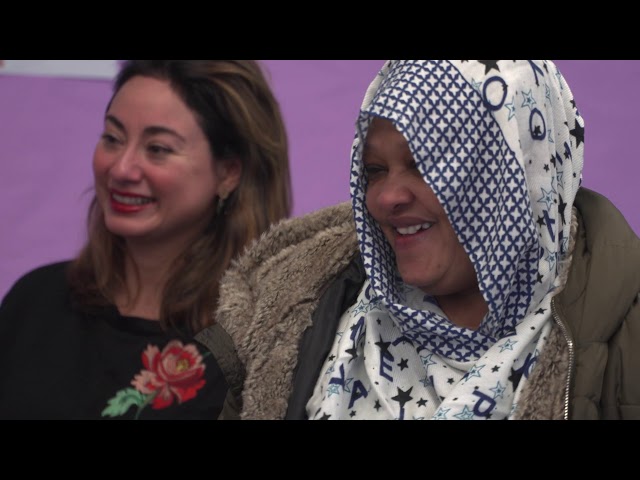 A call to action to help

“It was a call to action to find out what we could do,” McKinnon tells us. “And that was to create a safe space for people in particular who were being forced even further into the shadows.”

Since its inception, Felt volunteers have helped 1,300 students from countries around the world.

At first, classes were offered in-person in New York, but with the pandemic, Felt moved to online classes. This helped the organization reach more students in the United States and even in refugee camps in Europe. Now anyone 16 and older is welcome to participate online and learn together.

…to create a safe space for people in particular who were forced even further into the shadows.

Volunteers structure lessons based on student needs, recognizing that some students may not know their date of birth or how to write their name. Among Felt’s students, some are college bound, while others are preparing for high school equivalency exams. Some want to help their children with homework or improve their English for job opportunities, says Noga La’or, an English intermediate and academic director at Felt. A woman wanted to give a speech in English at her son’s wedding, and with Felt’s help, she achieved her goal.

Whatever a student’s needs, Felt volunteers are ready to help by providing English lessons and providing trauma-informed lessons to the community, as some students have survived horrific circumstances, such as torture and trafficking.

“It’s about community and not just about English,” says Corinne Mitchell, who acts as registrar and runs student services. “You’re there for the English, but you find that sense of community and that safe space where you can talk and engage and hang out with people who share a bit of your same story.”

A world of yum

The idea for a cookbook came from this sense of community.

Early on, as volunteers ran classes in East Harlem, they noticed that when students learned a new vocabulary word related to food, someone invariably brought that food to the next class meeting, McKinnon said. Students bonded over food (coffee, for example) describing how it is served in their culture.

Felt realized that a cookbook would help strengthen that bond and represent the breadth of students learning together. This year’s cookbook features students living in New York and beyond.

McKinnon has personally tried all of the recipes in A world of yum, making sure each one was pretty easy to do. Recipes represent more than a dozen countries including Bolivia, Rwanda, Syria, Taiwan and Yemen.

This is the second cookbook published by Felt. The first book, A spoonful of homemade, which was released four years ago, is also available for purchase. When the first book came out, a featured student took it everywhere with her, finding ways to bring up the book in conversation.

“It makes their story and their food feel welcome,” McKinnon said. “It’s the fact that someone wants to know them.”

Their story and their food are welcome.

Proceeds from book sales are donated to the organization to help with administrative costs, such as Zoom licenses or buying tablets for students who need devices. So far, the group has provided 200 tablets to students so they can participate in classes, which is all the more important as more than 70% of Felt students live in precarious housing.

Unlike more formal ESL (English as a Second Language) courses, the outcome is not to receive a particular certificate. Instead, students leave with improved English skills and a group of friends. The volunteers love to see the students chatting with each other, congratulating each other on their English and wishing them luck with the events in their lives.

“One of the things that is really important to us is creating a sense of community for our students and creating a space where they feel accepted, where they feel respected and where they feel supported. Many of our students, their lives are not easy and they are not necessarily treated well when they go out”, La’or says. “For them to come and have a space where we respect them for who they are, they’re able to create a sense of community with their classmates, I think that’s really powerful and empowering.”

The books are available for sale online. The felt is also looking for volunteers who can help with teaching, social media and student services.